On a sunny afternoon in towards the end of June of the year 2000, the society held its final garden party of the millennium. An enormous crowd gathered for this prestigious event, including a record number of honourary members. The Queen, however, was unable to attend, but she sent a nice letter of apology and we hope to see her next year.

The Committee & James Of The Society 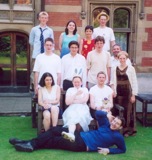 A Selection of Members 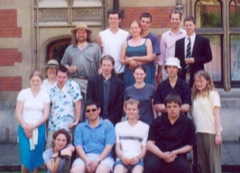 Armed with a heavily laden table of food, the society got down to what it does best. As to what this is, nobody really knows, but it includes: 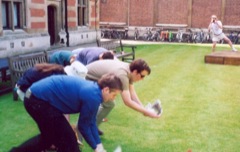 All good things have to come to an end and the Garden Party was no exception, but there was just time to sing the society anthem before we all went home.

Photographs used with the kind permission of Owen Barritt